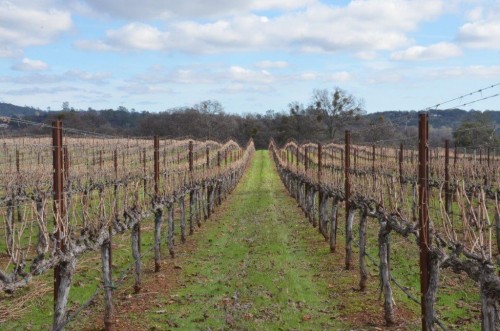 A new year, a new growth cycle, a new vintage in the works… starting off with the first business of the new year in the vineyard- pre-pruning.  First off, I must apologize on being a few days late with this post.  I had joyfully completed the post at the beginning of the week, ready for regular posting on Tuesday and was locked out of WordPress.  When it was unlocked, my post was nowhere to be found. And then the dog ate my homework.  I swear it.  Anyway, because of this there is bad news and worse news.  The bad news is I forgot all of my good jokes, the worse news is I remembered all my bad jokes.  So welcome to “What’s Goin’ On 2.0! Ok, on to pre-pruning…

Pre-pruning, also known as double pruning, is the first part of two pruning passes, the second of which is called final pruning.  Now, why there isn’t a “pruning” in-between the “pre-” and “final”, I’ve no idea, but I guess wisdom is in the elders, yadda, yadda.  So, why would we do two passes…seems like it would be easier to do just one, right?  Like much of winemaking and viticulture, there is a method to the madness.

There are two main reasons for the double pruning.  The first is due to Eutypa (sounds like you typa my paper I buya you a latte).  Eutypa is a fungus that is present in many vineyards and leads to wood rot.  Hold on while I back the pruning truck up a bit.  When we do final pruning, we leave 2 buds from which the shoots will grow from.  With pre-pruning we leave 4-5 buds.  When you prune, the vine is cut, leaving an open “wound”.  Just like with skin, having an open cut can lead to infection…see where I’m going with Eutypa?  If the spores get into the cut, it can cause an infection.  However, unlike a bacterial infection, it takes weeks for it to travel down.  Thus, when the time for final pruning comes, the infection has not traveled much beyond the fourth bud and the diseased part will be pruned away.  Since Eutypa is active from December through early February, this is a great way of controlling this particular pest.

The second reason for double pruning is that it delays bud-break.  Of all the times of the growing season, it is the spring that is most fraught with damaging weather (frost and wind and hail, oh my!)  On a side note, I’m very pleased I was able to finally work the word “fraught” into a post.  The 4th and 5th buds on the end go through bud-break first, followed a week or so later by the 1st and 2nd ones at the bottom (poor middle-child 3rd bud doesn’t get a mention).  If we didn’t leave the 4th and 5th buds, the first and second would go right to bud-break, but instead, we can delay bud-break by a couple of weeks.  This is one of our methods of frost protection- keeping those tender leaves safe for a couple of extra weeks. 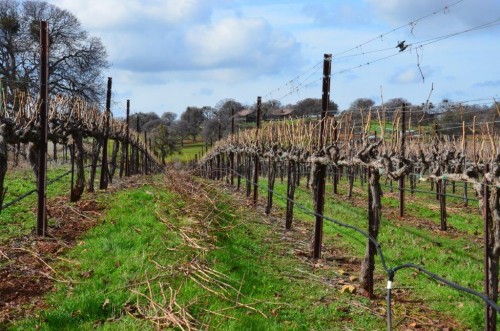 That’s “what’s been goin’ on” in the vineyard.  Next post will be “what’s goin’ on” in the winery.  Did you pick out which jokes were the bad ones I remembered?  (Psst- kind of hard since they’re all bad!)