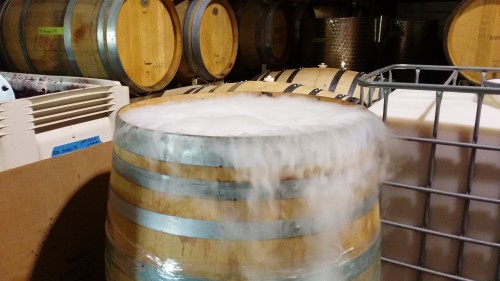 I like a little order to my universe.  Things to happen when they are expected to happen.  I prefer to read of others dealing with chaos rather than live it myself… and this is why I could never be a farmer.  Well, technically I deal with it in a tangential way- being married to a farmer, I am occasionally required to utter soothing platitudes along with a cold beer, say, when it hails in the summer or there is a hard frost in April.  Derek is pretty good with rolling with things- you have to as a farmer because it seems as if there is never an ideal growing season or harvest.  You know where I am going with this, right?  This harvest is no different… but, if it wasn’t unusual, wouldn’t that be unusual?  Whoa, better stop before I blow my own mind…

Indeed, this year offered up a particularly strange harvest.  Typically we start harvest the first week of September (not the middle of August) with a particular order to the fruit coming in:

However, this year there is some disorder to the order:

So, exactly what have we been dealing with this harvest?  In the last post, the “Harvest Rant”, I talked a little about Derek’s feelings on relying solely on sugars to determine when to pick.  The Cabernet Sauvignon I mentioned above came in at 30 Brix- quite high, but with a pH of 3.5- ideal acidity.  If we picked at a lower Brix- more in line with what is considered “ideal” we would be dealing with some very “green/rustic” wines.  It’s much easier to lower the alcohol of a wine than to blend out green flavors. 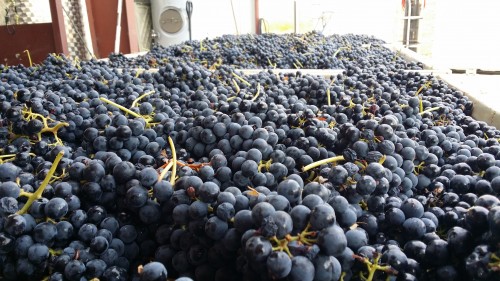 As far as crop size, while we had been expecting an average size crop based on cluster counts at bloom time, in reality we are seriously short across the board.  The berries are extremely small, weights are light, and some varietals just didn’t set well.  And here is why Derek is such an excellent farmer- he finds the bright spot in the disorder.  While the above smacks of catastrophe, Derek sees this as producing great, intense wines (just not as much as we’d like).

And to demonstrate that these strange happenings are not just relegated to Naggiar, driving through Napa, we saw Cabernet Sauvignon being picked in Oakville and Rutherford while Chardonnay and Pinot Noir are still hanging in Carneros.  Chalk it up to another unexpected side effect of the drought.