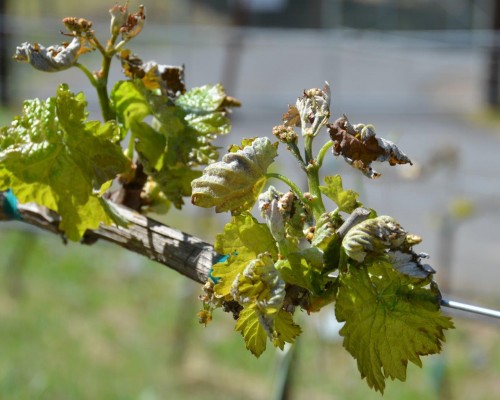 Frost, mildew, and deer, oh my! 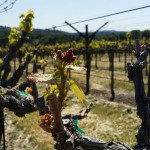 Oh, and wind damage, too (had to add that in after the fact or my Wizard of Oz reference wouldn’t work).This time of year, we are in a very critical stage of growth. Right now, we have lush green growth of 2-10 inches from the spurs (wanted) and suckers (not so much) on the vines. Grape clusters are even starting to form and are visible in some of the earlier varietals such as Viognier and Syrah. The shoots are nice and tender and the connection between the shoots and the spurs is pretty weak, pretty much a recipe for trouble. These next few months are when the vines are most vulnerable to the aforementioned fearsome foursome.

As this is farming, there are a myriad of things that can go wrong.  By far, the one we most worry about at this time of year is frost. With frost, we worry about the tips on the shoot freezing, and thus sustaining damage (repercussions to follow).  Obviously, we worry about the entire shoot freezing, but even just the tip freezing is enough to make an impact. So far this year, Naggiar has experienced one mild frost event, though with the crazy weather we have been having (hello…snow in April just north of Naggiar!) looks like we’re in for a few sleepless nights the next few months. 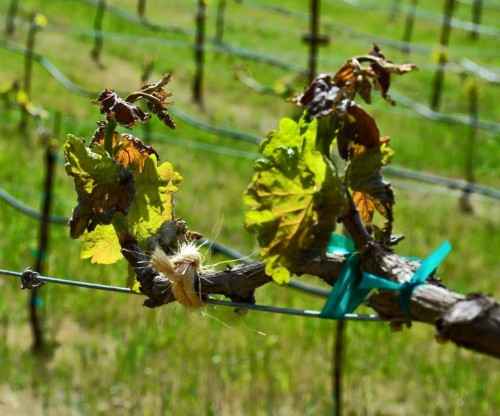 If it’s not frost, then it’s the wind- good at keeping the temperature above freezing (yay!) but also can snap the shoots off or whack the tips against the nearest catch wires (boo!).  And we can’t forget Bambi- if you are of a certain age, you may remember the “Mares eat oats and does eat oats, blah blah blah”, well the Northern Californian does have developed a taste for the sweet, tasty tips of vine shoots,  It would seem that California wildlife enjoy the products of the vineyard almost as much as people do.  To keep this PC, I won’t share what Derek would really like to do to said wildlife.

Repercussions… told you I would get to them.  Through either frost or wind or act of Bambi, the terminal or apical end of our shoots is gone.  In response, the axial buds (closest to the spur) will push out a new shoot.

Axial bud getting ready to push in response to frost damage

So- no harm, no foul- there’s a new shoot to replace the damaged one, right?  Well, if it were that easy, there wouldn’t be a point to this post.  First off, this new shoot may or may not be fertile- i.e. carry fruit.  In essence, it might be shooting blanks (yeah, that’s right, I totally went there).  And just FYI, you often get this result in frost-damaged Pinot Noir- as Naggiar does not grow any, we are spared this concern.  Additionally, shoot damage can cause uneven shoot growth and a resetting of timing of growth.  Damaged vines will be now be about 2 to 3 weeks behind the others that were unaffected.  This means we have to delay canopy management work and even picking schedules in the sections later on down the line.  So depending on the frost pattern, there could potentially be two separate picks in a single block where typically there is only one.  Hey, it’s always something…

…speaking of which- frost- check, wind- check, deer- check.  Ah, mildeeewwww.  The crazy weather I mentioned brought snow just north of us, but came to us in a greatly-needed good amount of rain.  Yay for rain!  Kind of, sort of.  Rainfall, if followed by moderate temperatures, will result in mildew and mildew on young shoots is, as Salvadore says, “no bueno”.  In a past post or two, I mentioned our methods for managing mildew, primarily, by opening up the canopy.  However, there is no canopy at this point so all we have is sulfur and prayers that the weather turns cool.  Thankfully, we dodged that bullet with the last storm. 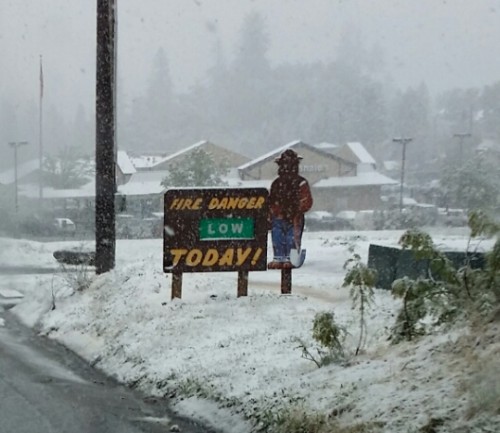 So, the weather we are looking for is no wind, no freezing temperature, rainy, but cold.  Is that too much to ask?  Oh, and Derek will take care of the deer………just kidding, tall fences make great neighbors!

As a footnote- voting is still going on for the KCRA 3 A-list for Best Winery in the Sacramento area.  Thanks to all of your help, we are currently in first place- and we’d like to keep it that way!  So, if you haven’t voted yet, or know of someone that hasn’t yet, we would greatly appreciate your votes!  Voting ends May 3rd, but why wait?!