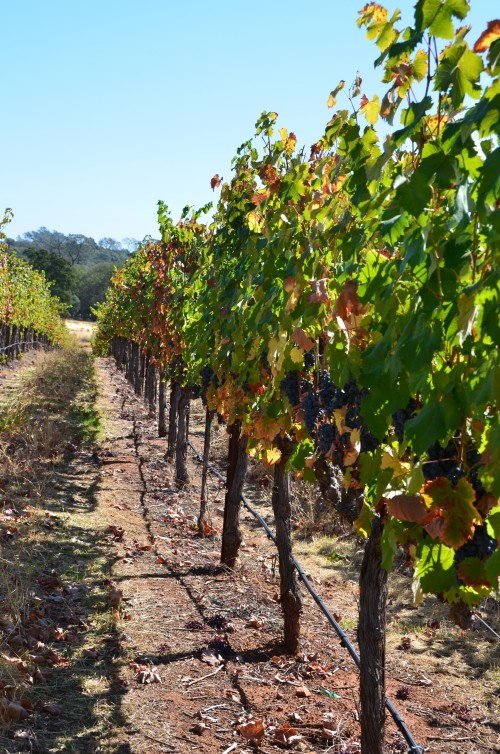 It’s been awhile since I did a post on a varietal, and with harvest just finishing, I think it rather apropos to wrap up harvest with a post on the last grape that we bring in at Naggiar- our little red caboose- Mourvedre.  Aside from the universally well-known synonym of “little red caboose”, Mourvedre is known as Monastrell (its REAL name- ahem, France) and Mataro.  Lesser known aliases are Mourves, Negron, Tinto, Tintilla, and in some cases, Alicante.   Perhaps the most   unique  name for it is “estrangle-chien”  or the “dog-strangler”  Yes, from the same country that produced the Marquis de Sade (and ditched the original Monastrell). Mourvedre is one of those universally planted varietals- from France to Algeria, Spain to Australia, and California to Tunisia.  We have three blocks of Mourvedre at Naggiar consisting of two clones with those blocks being planted in three different parts of the vineyard- variety, the spice of life.

So, how does our Mourvedre grow?  Very well, for the most part.  Mourvedre is a viticulturist’s dream to manage- bud break is late,

thus usually avoiding frost issues.  And boy howdy, does it make a vineyard look swell- perfectly vertical shoots, dark green topside of the leaves with a silvery underside, big, beautiful conical clusters of blue-black berries- kind of like the Cindy Crawford of all the varietals.  The downside of it is Mourvedre tends to ripen rather late- heck, very late…Thanksgiving late.  At this point, as our weather starts to turn cooler and rainier (crossing our fingers on that one)  sour rot becomes a possibility.  Due to all of our hot weather this year, that wasn’t an issue- as I said, all of our grapes are in.  What we avoided  in sour rot, we had to deal with earlier on in the form of drought stress of which Mourvedre is particularly susceptible to.  As always, a little creative canopy management works wonders. 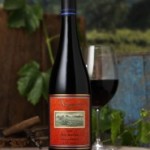 And, how is our Mourvedre made (and more importantly, how does it taste)?  We ferment it in a combination of stainless steel and wood barrels.  After a light pressing, it is aged in 100% French Oak, of 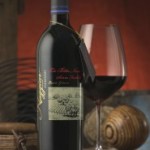 which 20-40% are new barrels.  The flavors and aromas are very unique to Mourvedre, making it great on its own- at Naggiar as a varietal wine, as well as a great blending varietal- blended into our Syrah, Reserve Syrah, Le Grand-Pere, Mistero, and La Bete Noire.  Flavors you get are cracked green and black pepper, lavender, anisette, loamy soil, and a tremendous amount of a combination of dark fruits such as blackberry and black plums.  It is dry with medium body and medium tannin.  All wine shines best with food, but this is particularly true of Mourvedre, definitely not much of a sipping wine.  Reminiscent of a peppery Zinfandel or Petite Sirah, our Mourvedre pairs well with all of Derek’s favorite foods- duck, wild pheasant, squab and mushrooms (I’m with him on the last one).  Mourvedre is definitely one of those wines you want on hand during the cool, winter months.

As a teaser, I will mention that our annual holiday case promotion is coming up soon- a fantastic deal, made even more fantastic if you are a club member.  Mourvedre would be an excellent contender to be included in this deal…