Last One In Is A Rotten Grape… 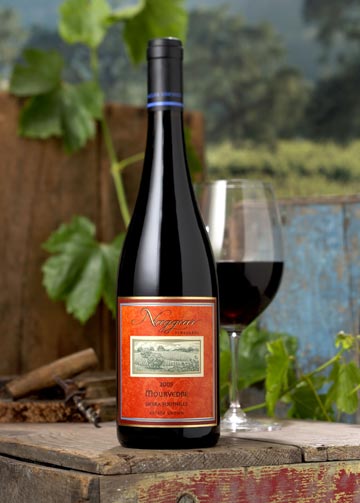 Year in and year out, we can count on our Mourvedre being the last grape varietal out there.  As our other vines start to go dormant, the Mourvedre is just starting to hit it’s stride- the tannins start to mellow, the dark fruit and peppery characteristics, along with an earthiness start to show.  And, despite my attempt at a catchy title, Mouvedre, when it comes in, is anything but a “rotten grape”.

Mourvedre is the name most people associate with this varietal, however it’s original name is Monastrell- Mourvedre being the name given to it later by the French, who seem fond of replacing the original name of grape varietals with their own (see Pinot Grigio to Pinot Gris and Garnacha to Grenache, as well as others).  Native to Spain, Mourvedre is grown all over the world.  It is particularly successful at Naggiar as we are one of the few places in the world that can fully ripen this varietal without turning it into a raisin.  Mourvedre is considered one of the main red Rhone varietals, along with Grenache, Syrah, Cinsaut, and Cunoise (all of which we have on the estate).  It produces a medium to full-bodied dry red wine, unless it being used to make a rose’.

At Naggiar, we make a straight varietal Mourvedre, but it also makes it way into our Le Grand-Pere, reserve Syrah, Don Giovanni, and sometimes, the Mistero.  Similar to a peppery Zinfandel or Petite Sirah, our Mourvedre, which is almost always 95% or more Mourvedre, is loaded with blackberry and black plum fruit characteristics, with a touch of anisette, black pepper and minerality to round it out.  Sound like a wonderful wine?  It is, the only catch being it is one of those wines that really needs to be paired with food.  Specifically, it shines best when paired with duck, wild pheasant, and mushroom dishes.  This in itself, is why Derek-winemaker-husband finds it to be one of his favorite wines- he is definitely a fan of wild game.

So, guess what kind of food is coming into season?  You guessed it, wild game, roasts and mushrooms!  How about getting a jump on fall by picking up a bottle of Naggiar  Mourvedre to go with all of those savory, comfort dishes that come with the season?  And, if you come up here and Derek is around, he would be more than happy  to share a recipe with you!