The rainfall for January was low enough for me to title last month’s post “Dry January”.  In comes February with a “hold my beer” (though wine would be the more appropriate alcoholic beverage in this scenario). The last recorded rainfall was January 28th and we are looking at February ending with exactly ZERO inches of rain for the month- that’s even with Leap Day.

Not only has it been dry, but it’s been mild as well.  So dry weather+mild temps= spring, am I right?!  Not only are we humans fooled by this, but the plant world is as well. The soils have started to warm, which in turn is stimulating the vines.  Where we normally see bud-break starting late March/early April, if the weather continues, we are looking at it starting the second week of March.

A vineyard before pruning

While we may be enjoying this weather (rather guilt-free since the reservoirs are full), it is no bueno for the vineyards. If the rains finally do start up in March and April after bud break, there will be an increased danger of wide-spread fungal outbreaks on vines that already have a significant amount of growth. There is also the danger of a hard frost- just because our weather has been mild earlier, doesn’t mean the the frost danger is over earlier.  Generally, the frost danger isn’t officially over until the first week of May. Bud break being earlier means there is more time that the vines can be affected by a frost event. 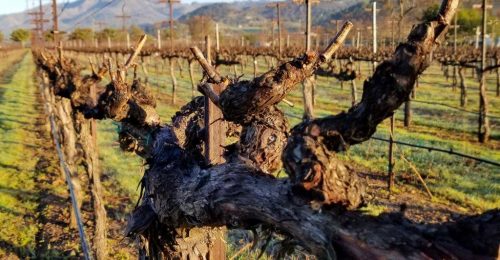 One way to help mitigate this is by pruning later. Normally, we start pruning the second week of January with pre-pruning…we just started pruning the end of February.  By doing this, we can buy ourselves another 10-14 days by “resetting the vines”. And bonus- we have access to work crews that are done pruning in other areas. With the labor shortages, this advantage cannot be overstated.

As Derek often states- “Ah, the joys of farming”.