Vines Are a Changin’ 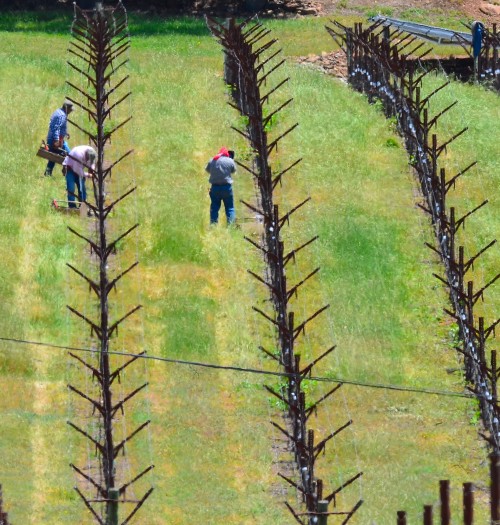 As time goes by, you gradually start to understand which varietals grow best in your area along with which varietals are most desirable to the buyers of your grapes and, Naggiar is no exception. With our award winning Malbec and Bordeaux blends, we have seen an increase in the need for additional fruit. There are a few ways to increase this fruit- from planting additional acreage (really expensive and 4-5 years before the fruit comes in), to buying fruit from another vineyard (which doesn’t work in our case since we pride ourselves on 100% estate grown grapes). The way we have gone about solving this issue is through the labor and time intensive process of grafting. To accomplish this, we graft over some of our vineyards from blocks that don’t produce as well for various reasons to a new varietal, that while still time intensive, only takes a year for the fruit to come in.

Before we do the actual field grafting, there is quite a lot of preparation that has to occur. After deciding the varietals we wanted to graft, we had to decide whether we were going to use our own budwood (scion material) or purchase budwood from a nursery. So, we split the difference and decided to use our own budwood for the Malbec and purchase the remainder from a nursery. 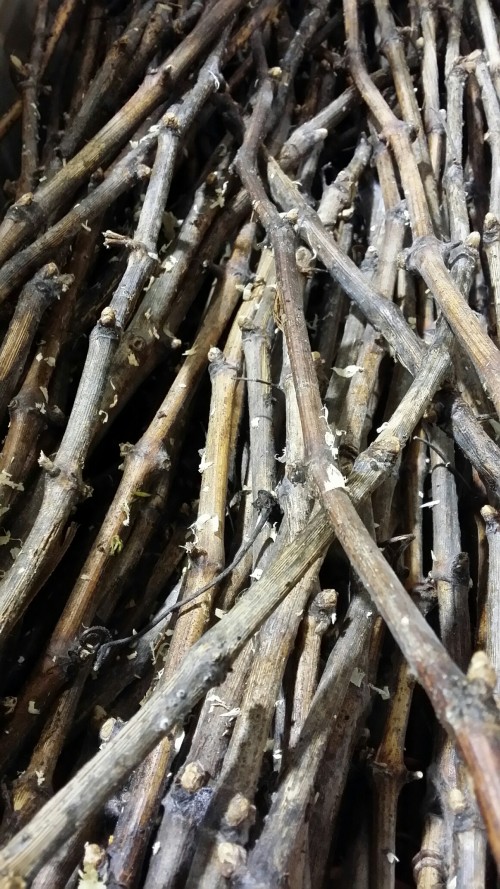 Home-grown budwood with 5-6 buds per bat

In using your own budwood, the work begins sometime between December-February, when the vines are still dormant. First, the budwood needs go through a strict evaluation- they must be clean, properly sized (about a pencil’s diameter), and have 5-6 buds per “bat”. Once cut, they need to be properly stored inside, in a cool, moist environment- we need to keep that bat thinking it’s still dormant so it doesn’t push prematurely. And, as variety is the spice of life, the remainder of the material was sourced from a nursery to change up the varietal clones from what we already had. 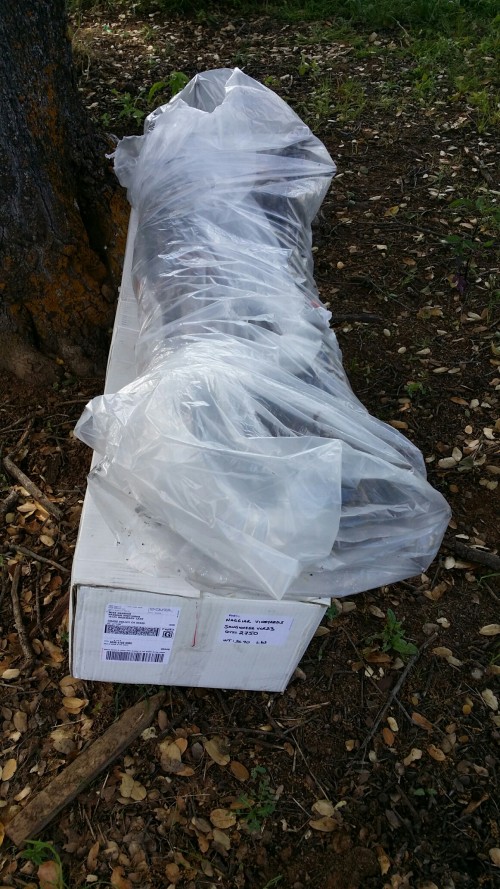 Budwood purchased from a nursery

The next step occurs in late-February to early-March, when we prepare the vines that are going to receive the grafted buds. To do this, we lop off the entire arm to just the first two buds, so the vine looks like a “T”. At this point, the vines are still dormant or just coming out of dormancy. Once the vines are out of dormancy and about 7-10 days prior to the actual grafting, we lop off the top part of the “T”. Since grafting is done when the vines are out of dormancy, the sap is running and they will “bleed” when cut. As I mentioned in a previous post, this is a good thing as it not only relieves some of the internal pressure in the vine, but the positive pressure in the vines pushes the fluid out- like bleeding, it pushes the dirt out and keeps the bad stuff from coming in. Hmm…who knew getting your head cut off could be a good thing?! 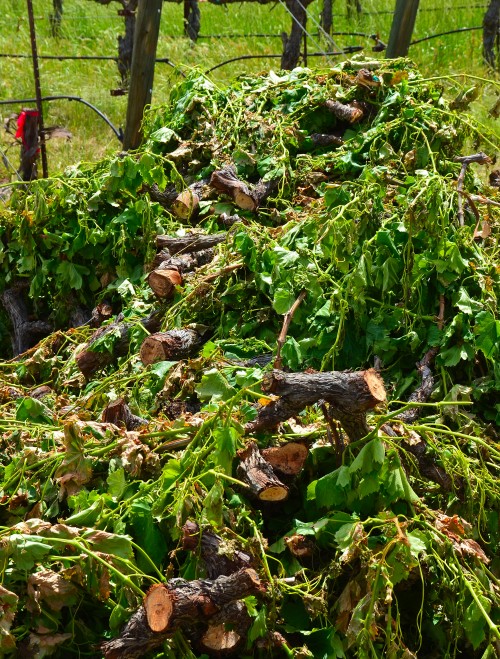 Finally, it’s time to do the actual grafting. When we graft the vines, we need to make sure that the cambium layers of the new bud material match up closely with the rootstock of the “graftee”. Yes, I just threw that random botany term right atcha’. And made up a word with “graft”…Boom. The cambium layer is the layer of green living tissue that lies between the bark and the wood. So, the injured tissue of one vine (the bud) hopefully heals to the injured tissue of another (the existing vine). Just putting two cut vines together doesn’t guarantee a successful graft. The healing of the two parts only takes place if the cambium layers of both the trunk and the bud are in permanent contact with each other. The shape and how you cut your bud must be tailored to allow as much of the cambium tissue on both pieces to contact each other. 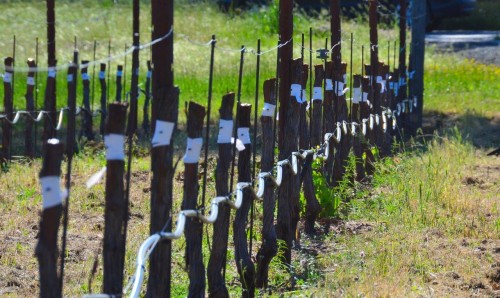 There are multiple types of grafting that are used, and of those, Naggiar uses a combination of t-budding and chip budding. Both methods require just small cuts- woohoo for small injuries…well, except for the whole arm and head cutting off thing.  We place two buds per vine, one on either side of the existing trunk, securing the buds in place with grafting tape, which helps ensure the buds stay in place and healing starts immediately. Even though the buds are secured, there is still some internal pressure in the vine that is great enough to separate the new graft. To relieve this pressure, we lightly cut the base of the vine, a few inches off the ground on either side of the trunk, cutting through the cambium layer. These cuts will reduce the sap pressure at the top of the trunk, allowing the graft union to heal. Aww, I just love a happy ending. 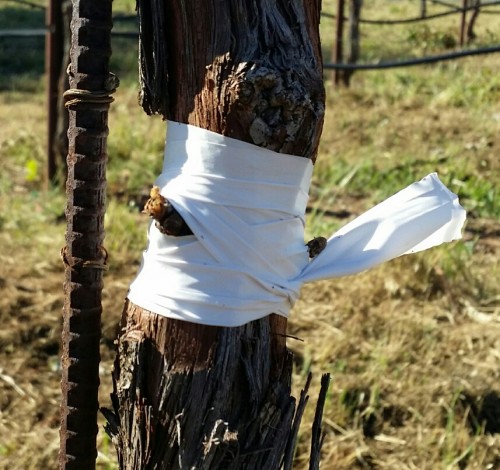 While Derek is a pretty speedy 100 two-bud vines a day grafter, the crew we brought up does 2.5 times as many as he does, leaving him free to help shuttle the kids around to all of their sports activities. And, most of their grafts take. A big “hip hip hurrah” for the crew from me!

Whew, that was a long one- I’m winded!