Believe it or not, winter is a busy time in the vineyards. Before pre-pruning, we got a jump on some grafting we plan to do in the spring- the real spring, not this false February anomaly. With the rise in popularity of the Malbec, we decided to devote more of the blocks to growing Malbec. To achieve this, we removed some of the budwood (buds from which the shoots will eventually grow) from our Malbec, to be grafted onto some of our existing vines in the spring. We also began the Herculean task of removing 68 acres worth of invasive weed species from the vineyards….in the rain…with shovels.  Of course, this was back at in January before spring had sprung in February…with winter due to return in March (in like a lion!).

Things are just as busy in the winery. We performed rack and returns on the 2014 and 2015 vintages, checking them for completing MLF (malo-lactic fermentation), removing them from the lees, and finally “putting them to bed” (letting them rest in the barrels undisturbed). More importantly, February and March are big bottling months for us. We are really looking forward to finally bottling the long-awaited 2013 Reserve Syrah. For you Bellissima lovers out there, the 2015 vintage is also on the schedule for February. The exciting news is that we will be bringing back an old favorite wine with this bottling…be on the look-out for the big announcement in the near future!

With March, we leave the spring of February behind, and are back to winter, with a series of storms lined up for the next 2 weeks.  No more easy days in the vineyard for awhile! 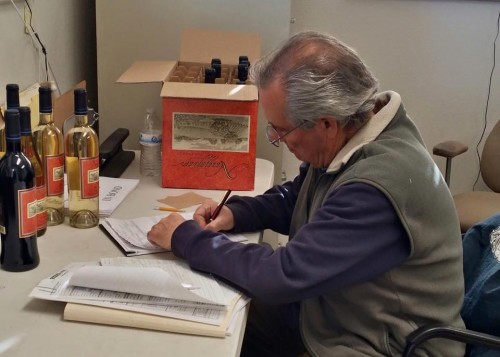 The maestro conducting a successful bottling…