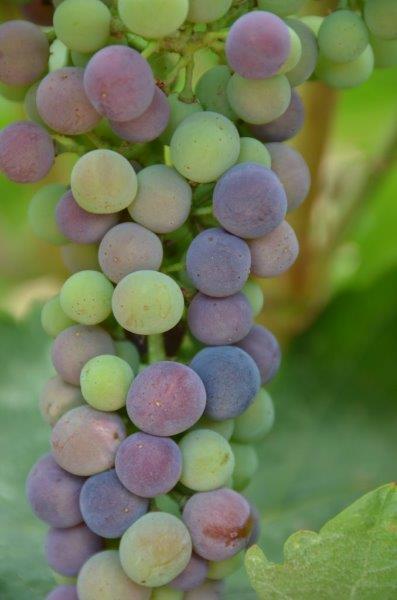 We can always tell when an email comes from Mike Naggiar even before we read who it is from.  Mike……..has a very unique way……..of composing his emails………that Derek likes to refer to as……….. a “Mikeism”.   This email was Mike’s way of announcing that veraison, the change in the color of the fruit, has begun.  About a year ago, I did a short post on veraison.  This week, I am going to correct that egregious error and do a loooonnngg post on versaison.  Wait- don’t delete!  I kid- I’ll try very hard to keep it to my usual 500-ish words, though it may be at the expense of my trademark witticisms.  And thus…….I give you……..the science of …….verasion…

There are a few physiological changes going on during veraison, other than the obvious one of the grapes going from green to gold or red.  So, starting with the obvious change, color change comes about when plant pigments-anthocyanin in red grapes and

carotenoids in white grapes- start to build up.  Those two pigment names might sound familiar if you think about it- those are two of the antioxidants in wine that makes it such a nutritional super-food, er, beverage.  Additionally, the overall acidity of the individual berry starts to decline, especially the malic acid (as opposed to during seed hardening, when tartaric acid has the lower levels).  Once the acidity drops, sugar accumulation (glucose and fructose) begins.  The amount of sugar that accumulates in the individual berries depends on leaf functionality and the amount of photosynthesis that occurs.  Basically, the healthier the leaves, the greater amount of photosynthesis going on, the faster the sugar accumulates.  Lastly,  the berries, which until now have been increasing in size  now stop cell-division, resulting in final berry diameter.  Not only that, but those rock-hard berries finally begin to soften. 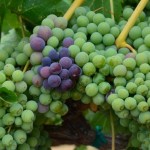 At this point, 35-55 days from now puts us at August 18th as a start date for harvest.  This is the earliest Derek has ever started a harvest at Naggiar by a good ten days.  With the current heat, which is normal for summer in the area, we should be able to achieve optimal brix (sugars) and phenolic development (flavors) with our balanced vines.  Of course, we are able to do this because of our vigilant canopy management that I have been touting the last few months’ worth of posts.  It all comes back to canopy management. 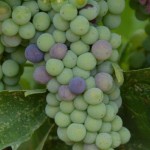