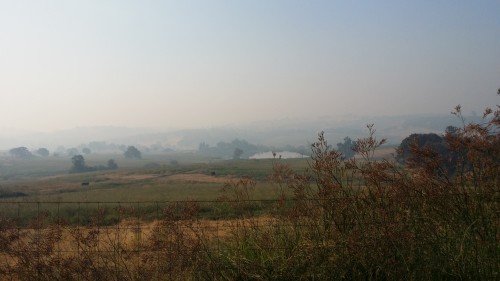 One can almost argue the point of this being a harvest of “biblical proportions”.  Amongst the wine-growing areas of Northern California, we’ve experienced- earthquakes, drought, fires, torrential rain, hail- can the locusts be far off?  Being 85% done with harvest, any impending plagues wouldn’t do us much harm, but we did just have to weather two of the above a few days ago.  First came fire in the form of the massive King Fire, which has burned almost 100,000 acres over the last 2 weeks or so, and lent a haze and strong smoky smell for miles around it, including at Naggiar. 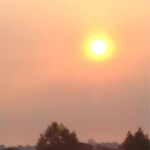 The beautiful yet unhealthy affect of a large wildfire

This led to many questions of whether it would affect the grapes and resulting wine.  Thankfully, this plague won’t be affecting the grapes, so you can all relax.  What we call “smoke taint” does not affect the grapes at this stage of development- the issues come when the fires happen just before or during veraison. 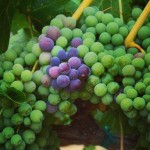 Smoke taint at this stage in the growing season is no bueno!

During versaison, the phenols in smoke are absorbed by the vines and grapes and end up in the finished wines where they cause off-odors such as smoked fish, ashes, even eau de ashtray.

Smoked fish on a bagel- delicious, smoked fish in your wine- not so much.

There are actually two compounds that you can test for that are indicators of smoke taint, Guaiacol and 4-methylguaiacol (just in case you are planning on going on Jeopardy).  In 2008, we actually had to look for these compounds- that was the year we had fires early in the summer and they were much closer to the vineyards.  We escaped it that year, but other vineyards nearby did not fair as well.

Rain, on the other hand, while a huge help in containing the King Fire, had the potential for an even greater deleterious effect on the grapes- trading one plague for an even greater one.  At Naggiar, we received a smatter of rain on Thursday, were pounded by it Friday night and Saturday morning, and ended with a general light rain all day Sunday (thankfully, our harvest festival was the previous weekend).  We were lucky to avoid the torrential downpour and hail that parts of Napa saw.  In a past post, I mentioned how destructive a hailstorm can be, turning a beautiful harvest-time vineyard into a field of toothpicks- thankfully, those kind of storms are extremely rare in California wine regions.  Rain, however, brings its own dangers in the form of bunch rot and botrytis, as well as physically affecting the whole vineyard.  If the ground gets too wet, it is hard to get the tractors into the vineyards, and if you do, then there is a greater potential for accidents, putting the workers and vines in a dangerous position.  Not only that, but driving on the wet soil compacts it near the root zone- not good for the vines.  Lastly, continuous rains or significant rains can reduce the sugar content in grapes either through root zone uptake or through water retained in the clusters- a drop of 3-5 brix is not uncommon. 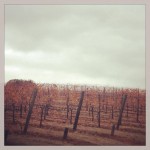 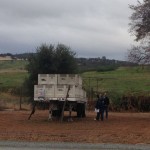 Rain from late November to April- fantastic, rain from June to the end of October- not so much.

And now for the million dollar question- just how much did the rain affect Naggiar?  Well, it’s kind of a mixed bag, with more 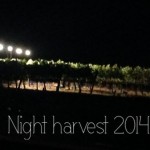 positive than negative.  The rain from Thursday had time to dry out before the storm Friday night, but we have had a couple of cool days following Sunday’s rain.  We had to delay our picking for a day to let things dry out a bit, but warmer weather is on the way- upper 90’s by Thursday (California’s version of crazy weather).  The warmer weather and our creative canopy management should stop any bunch rot and botrytis in their tracks.  We do grow two varietals that are more susceptible to rot- Zinfandel and Mourvedre, with their tight clusters and thin skins- but fortunately, those are off the vines.  By the end of the week, we will be 96% done with harvest- crazy, considering it’s not even October yet as I write this- with only one block of the rot-resistant varietal, Cabernet Franc left to pick.  However, just to be safe, maybe a little lamb’s blood over the doors of the winery might not be a bad thing…