It all began with a retirement. After thirty-two years with Hewlett Packard, Mike Naggiar was looking for a second challenge. He took his passion for the family’s one acre hobby vineyard in Saratoga, California, and along with wife Diane Naggiar, embarked upon an extensive search throughout Northern California for a suitable location to start a commercial vineyard.

After a three year search, Mike and Diane “retired” with a vision to develop a sixty acre Sierra Foothills vineyard outside the small town of Grass Valley. In 1998, with the help of a vineyards expert, they planted vines and began to learn the grape growing business. They were soon selling premium quality wine grapes and gaining a superior reputation among discriminating winemakers in Napa, Sonoma, and their own Sierra Foothills.

The rural lifestyle and farming business grabbed the attention of family and friends who were soon visiting often and basking in the allure and serenity of the beautiful vineyard setting around the Naggiar homestead. Holidays found every room full and the dining table overflowing with the innate charm and welcoming warmth of a family brimming with members not only from the Northern California area, but from as far away as Canada, Europe, and Australia.

It was at one such dinner that the idea of making their own wines was born. And why not? With more than seventeen varietals to choose from and over six years experience growing premium grapes, it was inevitable that a Naggiar label would emerge. So began a family influx to the Naggiar estate. Mike’s nephew Tony Tibshirani, his wife Linda and their family relocated from Montreal, Canada and settled on adjacent acreage in 2001. Mike and Diane’s only son Shawn Naggiar, his wife Mary and their young family soon followed, expanding the family holdings – and increasing the available work force. They built their own home in the vineyards in 2008 and both Shawn, on the business front, and Mary, as Tasting Room Manager, are important members of the Naggiar team. In fact, each family member has a place in the family business.

The story of the Naggiar family – immediate and extended – is the story that their wines tell. With the help of 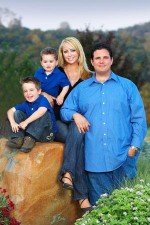 winemaker Derek Irwin, they crafted their first wines in 2003. Naggiar wines tell the tale of family members far and wide; from a robust red blend named “Don Giovanni” after an adventurous Milanese cousin, to an elegant white blend dubbed “La Contessa Sylvana” for the radiance it shares with its namesake. Naggiar wines are a culmination of family discussion, debate and deliberation – over a Sangiovese too traditional in style (or possibly not traditional enough?), or a Viognier that needs a touch more of “je ne sais quoi” to appeal to its French Canadian enthusiast.

As the Naggiar wines grew in personality and popularity, so did their journey into the Tasting Room experience. What began with “by appointment only” tastings in their living room in 2006 soon became the idea for a bigger and better venue. In 2009, the Naggiar family broke ground for a Tasting Room that has become a well known destination for both locals and out of town visitors.

The Naggiars hope to leave a piece of themselves with each visitor, just as they leave the legacy of a retirement hobby that grew into an award winning winery to their grandsons and the next generation of the family. An award winning winery – voted the Sacramento Region’s Best Winery by KCRA3 voters for an unprecedented eighth consecutive year – but a family passion as well.