A Crop Load of Grapes 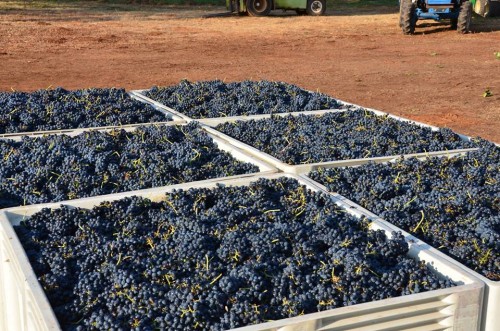 First off, I totally used that as a name for the post because I love me a good pun…or a bad pun, depending on how you view it.  For when I saw “crop load” written in Derek’s notes, it was written as “crop load is down” not the bumper crop of grapes implied by the title.  A little misdirection at the expense of a questionable joke never hurt anyone, right?  But, I digress…yes, tonnage is down, as much as 40-50% at some wineries.  In my last post, I alluded to the fact that this was caused by the drought.  Now, I am sure that all of you caught that and have been dying for a follow-up post to explain my reasoning.  Yes, this  post will do that but it will also go over non-related drought factors causing the lower than normal yield.  So, sit down and buckle up…I’m bringin’ the botany!

To address the drought-related effect; when taking this into account, one needs to remember that it’s not just the last two years or so- this has been building for over four years.  Each year compounds the lack of water, so the effect is magnified as time goes on.  Just like making a baby- er, growing a baby-  it takes a lot of nutrients for the vines to produce that lovely fruit and at the end of harvest, the vines are depleted.  During the winter, the vines are not completely dormant- the roots are absorbing nutrients from the soil.  If there is less water than usual in the soil, this happens at a much slower rate, thus less nutrients are taken up and growth of the vine becomes somewhat stunted.  Imagine running a marathon and not fueling up and hydrating in the days before- you not going to have an optimal result.   “Old vines” and vineyards that are irrigated through the winter didn’t see as much of a fall-off in yield as those that were young dry-farmed or had limited access to water.  At Naggiar, we started to notice reduced yields as early as last year in the vineyards we couldn’t irrigate in the winter.  Vines are interesting in that everything that we do or Mother Nature does to them this year will be reflected in the next year’s harvest.  Speaking of which…

As I mentioned above, there are other, equally impactful forces, influencing the low yield.  This year during bud differentiation and  again at bloom time, the weather conditions were no bueno.  The bad weather at bloom time affected fertilization, leading to smaller, more uneven clusters for this year’s crop. 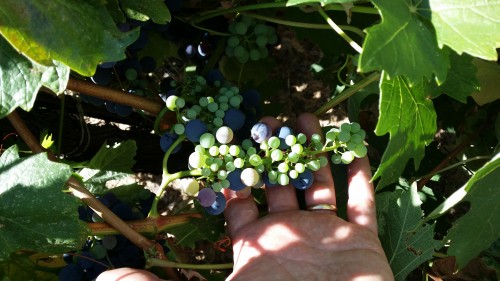 Uneven cluster due to weather issues at bloom time

The bad weather at bud differentiation has much longer reaching affects- it actually affects the next year’s fruit.  What this all means is that we should expect a reduced crop in 2016 as well.  Hopefully, El Niñozilla will show up to give us a good soaking this winter, which will help bring the the health of the vines up.

Despite it all, like Tiffany earrings or tickets to Bora Bora, good things come in small packages- the fruit, though small in quantity, is great in quality.